The club’s 133-year journey since its founding is a model of tenacity, wise management and strong teamwork.

West Bridgford Tennis Club is believed to have been founded in 1885. Its first home was on Millicent Road, at the junction with Bridgford Road. A move to Wilford Lane, close to the river Trent, followed in 1902. The Club then relocated to its existing site in 1906.

In 1920 the Club became a Company Limited by guarantee (West Bridgford Lawn Tennis Club Limited). One of the most important steps in the Club’s history followed in the same year, when the freehold of the ground was purchased. At that time the Club had seven grass courts and four red shale hard courts. However, the red shale courts were let to a separate Club known as the Hard Court Club until after the second world war.

There were occasions during the 1950s when the Club seemed near to closure but the hard work of Committee members enabled the Club to survive. In the 1960s the Club was more prosperous and in 1965 floodlights were installed on two of the hard courts.

In the 1970s with the annual senior subscription still in the region of £5.00, the Club was in a weak position as other Clubs began to invest in all-weather courts. Eventually enough money was raised to re-surface two of the dilapidated shale courts with grey-green grit, but it was not until the early 1980s that an enthusiastic Committee embarked on a series of major steps forward. First three new tarmacadam courts were constructed, followed by the construction in 1985 of a new brick-built pavilion which was paid for by selling the land which is now the site of the two bungalows separating the Club from Little Bounds. In 1988 the two grey-green grit courts were resurfaced with tarmacadam and their floodlights were renewed. In 1990 the five remaining grass courts were re-surfaced (three acrylic and two tarmacadam) and floodlit for the first time.

The improved facilities had justified substantial increases in the subscription so that for the first time the Club was able to pay its way from tennis income whereas previously jumble sales and other fund-raising events had been necessary. With the appointment of a Club Coach in 1990 an expansion of the coaching programme began. The number of members (of all ages) increased steadily. Greater strength in depth ensured that the Club’s teams continued to prosper. 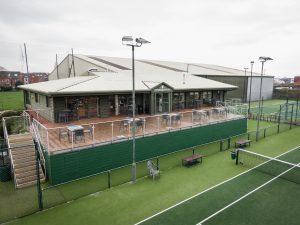 In 1995 the Committee submitted an application to the new National Lottery for a grant towards the cost of new indoor courts. The application was successful. Various problems were surmounted and eventually (thanks to the Lottery grant, LTA loan and a grant from Rushcliffe Borough Council) the new pavilion, gymnasium and indoor courts were opened in September 1999. Three of the outdoor courts had been resurfaced with artificial grass as part of the project. The pavilion which had been built in 1985 had to be demolished to create a larger car parking area.

The Club has changed dramatically. It reaches out to the wider community, not just its members and now has a professional management team, other paid staff and more coaches than before. However, it is still (as has been the case ever since 1885) run by an elected committee of volunteers on a not-for-profit basis with the object of providing the best possible value for all who use it.
The club’s philosophy of providing the best quality of all-weather courts and equally high-quality leisure facilities has proved a winning combination. WBTC can boast tennis all year round, for all standards of play and literally all ages of player!

In terms of competitive play, the club has teams competing in practically all age groups within Nottinghamshire and nationally, these range from mini-tennis through to 75’s.
The club hosts and manages many LTA sanctioned tournaments; the most significant of these being two week-long open LTA tournaments in the summer and autumn and a very popular seniors’ indoor tournament in January. 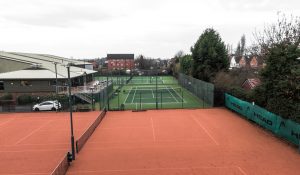 Having paid off the LTA Loan, in 2007 the club established a “sinking fund” for future investment in the club. This enabled the club to embark on an ambitious re development process which started with the replacement of three outdoor “plex-cushion” courts with all-weather artificial clay and then a complete refurbishment and modernisation of the indoor club facilities; this also included an extension to the terrace area.

The club is managed by a committee of unpaid volunteers, this comprises of a Chairman, Treasurer, Secretary and eight other members. There are subcommittees for Future Development, Tennis Coaching and Tournaments, Social Events, Safeguarding and Personnel Management.

The coaching staff visit and work with local school under a sponsored initiative.

The club’s Performance Coaching is also sponsored by a local business.

The club has established a Future Planning and Development Subcommittee whose aim is to plan and carry out continuous improvements to the club’s facilities. All surplus funds are reinvested in the club for the benefit of the members. A 10-year rolling development plan is in place. The next major anticipated project/cost is that of upgrading all 9-court floodlighting systems to LED.
Sources of Funding.